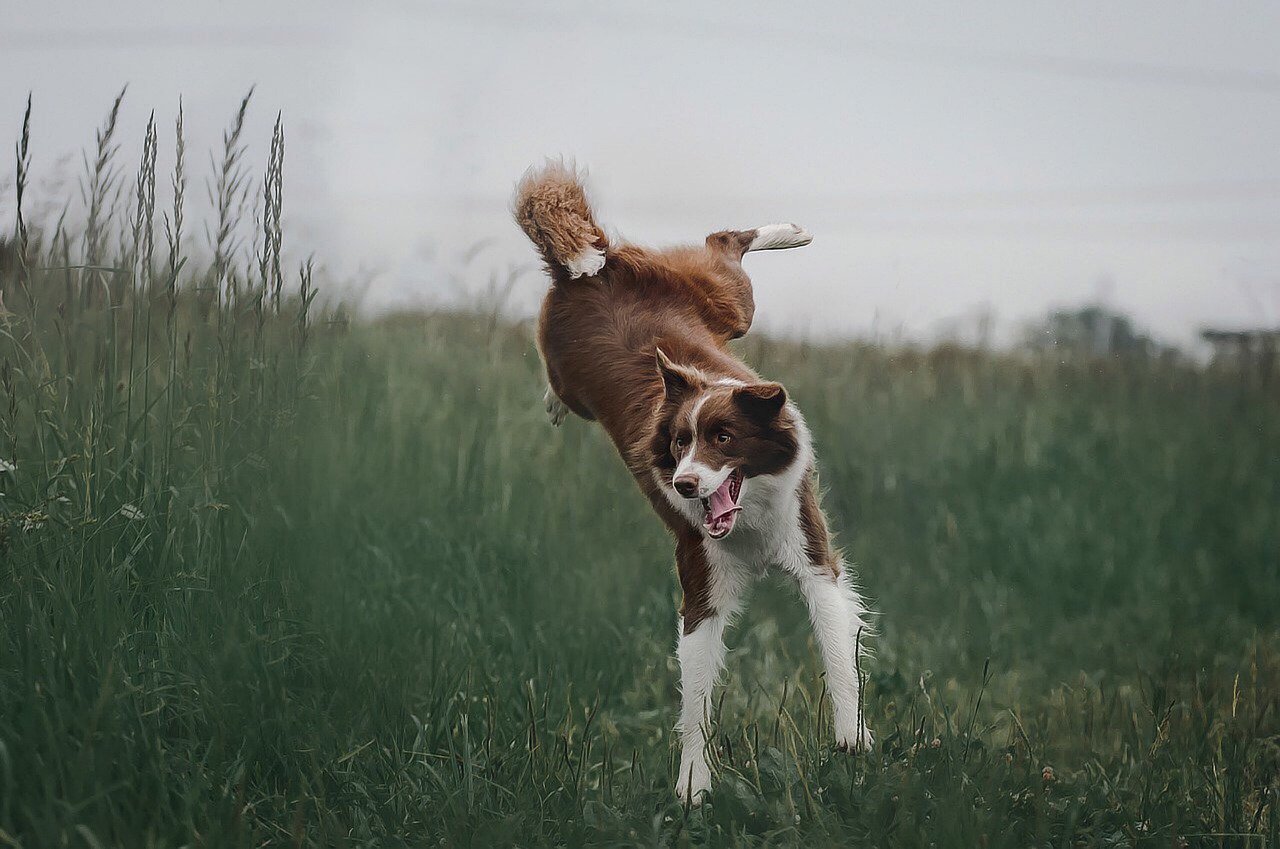 Dogs are known for rolling in the grass. But why do they do it? Dog behavior is often connected to dog’s senses, and this could be one of their ways of keeping themselves cool by releasing body heat. The dog may also enjoy the smells that come from grass or even just love being able to roll around.

They especially love to roll around on the grass or in dirty puddles. For this reason, dog owners need to be aware of their dog’s behaviors and surroundings because they may end up rolling on something unpleasant if not watched.

Some dogs have a very good sense of smell – much better than humans. But its main purpose is for smelling other animal’s scents so that they can communicate with each other about where another dog has been before them. It also helps mothers keep track of her young puppies when she returns from hunting food.

Dogs are often seen rolling around outside after coming through tall grasses or muddy puddles but there could be several reasons for this. One reason is that dogs like to roll around in the grass or mud because it helps them get rid of annoying parasites such as ticks and fleas.

It could also be a dog’s way of making sure he smells right when meeting up with another dog since smelling strange can make other dogs aggressive toward each other at times, especially during mating season.

On the flip side, some dog breeds have been bred specifically for their ability to follow scents so they are more likely than others to roll on something smelly outside if given half a chance! But even these dog breeds will still enjoy rolling in grasses once in a while just for fun.

Dog owners can purchase an all-natural dog shampoo for dogs who want a bath after having rolled around outside with other animals’ scents.

Here Are The Other Reasons Why Dogs Love To Roll Over in Grass:

Some dogs roll when excited about something (like going for a walk) while others do so out of anxiety; since dog rolling happens just before urinating, some experts think that if the dog smells its urine on itself, it becomes more relaxed, especially around other dogs. The fact that anxious dogs often have trouble controlling their bladders suggests another reason why some might choose to roll in the grass when they are anxious.

Dogs roll when it is hot outside because the dog’s temperature rises quickly without a way to dissipate heat and rolling in the grass helps them cool down. Rolling also releases earthworms and other bugs that might be crawling on their skin, which can then be eaten by dogs later. This behavior could have roots from dog ancestors who would roll around in places with bug infestations to eat them and get rid of parasites.

Some dog breeds such as Siberian Huskies, Rottweilers, Chow Chows, Keeshonds, Mastiffs, Norwegian Elkhounds, or Beagles often take part in this activity since these dogs were originally bred for cold weather conditions so rolling has an obvious effect: helping them cool down.

Sometimes dogs roll in the grass because they are uncomfortable with the texture of their coat especially if it is too long, dry, or damaged. This can be a sign that your dog needs more brushing and grooming, which should also help them get rid of any parasites such as fleas

Other dogs roll around on dead animals to hide their scent from other predators since this behavior makes sense for wild dog packs who need to avoid being detected by both prey and hunters alike. Some say that rolling could have evolved out of wolves’ practice of rubbing against trees containing strong-smelling substances. The only difference would be that instead of using tree trunks, some dogs learned to use grass patches when a small game like rabbits. Dogs may also roll around in the grass to mask their scent before eating dead animals they find on the ground.

As dog owners, we need to understand why our dogs are rolling around so that we can correctly respond. If your dog rolls after relieving itself or when excited then this behavior should not be punished since it’s just a way of communication and marking territory. However, if dog rolling seems repetitive, anxious, or obsessive then you need to take action by consulting with a dog trainer.

How To Train Dogs Not To Roll in The Grass

Dogs will roll in the grass and try to rub off the smell. It is a dog’s instinct, but it can be annoying for those who do not want their dog smelling like grass all the time. If your dog loves rolling around fenced-in areas or yards covered with grass, you might have trouble getting them to stop doing that as soon as possible.

To train dogs not to roll in the grass, then there are some tips and tricks you may consider trying out depending on what works best for your dog:

The first thing would simply be giving love by petting him/her now and again. If they see this behavior from you as rewarding enough when they are up after a little bit of rolling, then they will be less likely to roll in the grass a second time. You may also try playing with dog toys or dog games that do not involve rolling around on grass such as fetch and tug of war instead so it does not become too tempting for them to keep doing.

Another idea would be keeping your dog occupied by giving him/her something else to chew on other than their body parts such as dog treats, interactive dog toys like Kongs filled with moist peanut butter inside, and even things like dental chews that help clean their teeth while providing entertainment at the same time!

And finally, you can tell your dog no when he tries to get up after one good roll down without paying attention. If only adults can be able to do this with our dog, then by all means go for it. It will most likely end up in a dog fight if you are not sure what you’re doing though so avoid that at any cost.