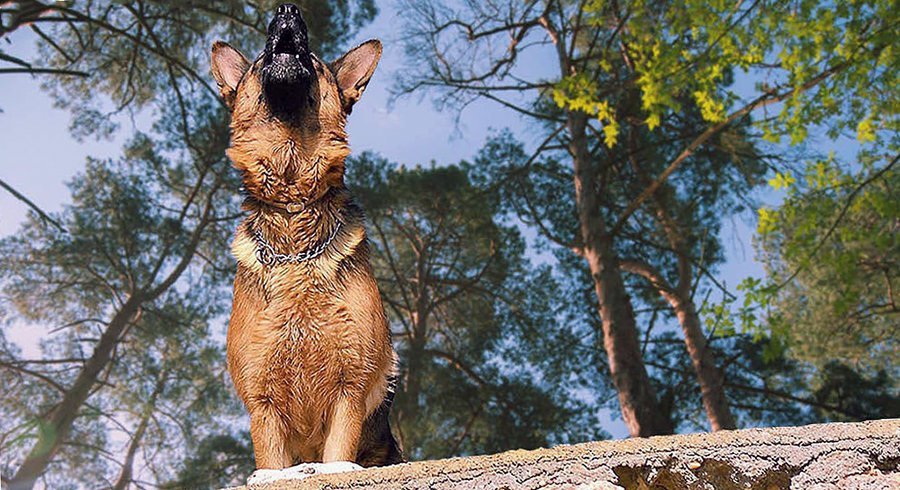 German shepherds can howl, but not all dogs do. Some just use it to communicate while others like attention. Fortunately, you can teach your German shepherd whether they already howl or not, as well as what kind of noise they should make – either alarms or vocals.

Why Do German Shepherds Howl?

There are many reasons your German Shepherd may howl. If you want to know how to stop it, find out the various reasons for why they might be doing it. If you want them to howl, there are ways to make that happen too.

Here are some of the reasons a german shepherd may be howling.

Most Dogs Howl From Instincts

One of the characteristics shared by wolves and dogs is howling. It’s in your dog’s nature to howl, so don’t make a dog feel bad for following his natural instincts.

Your German Shepherd Is Bored

When German shepherds are bored, they might howl to keep themselves occupied.

Unlike some dogs, german shepherds are very active. If they’re not getting enough exercise or their mind isn’t challenged to the same degree, they may start howling. Boredom may be exhibited by your pup in a number of ways. They may start chewing anything they can get their teeth on, or act up and do things you never thought they would behave like.

Your Dog Is Suffering From Separation Anxiety

When left without a family member, German shepherds will exhibit signs of separation anxiety which may include howling or even destruction to the home.

It is not uncommon for you to hear howling, barking, crying, or other noises if your dog is lonely without its family.

Your Dog Is Excited

Some dogs howl when they sense your approach if you’ve been away from home because they want to let you know this is where your home is. They don’t want you to get lost.

This is what wolves do to help guide other members of their pack back to their territory when these animals have been hunting and scouting for food.

Just like they may bark when intruders are near their territory, german shepherds also howl.

There are some benefits to letting your dog bark at other humans who show up within earshot of your home. On the other hand, you have to stop this behavior before anyone is concerned about being approached by an aggressive animal.

Your Dog Is In Pain

A howling animal of this kind is something you should never ignore. Your German Shepherd, for instance, may do this when they’ve been hurt and want help from their human.

If you suspect that this is happening, then take them to the veterinarian.

Your German Shepherd Is Happy!

Perhaps your German shepherd is howling because they’ve found a toy or some food and are extremely happy!

In a lot of cases, German Shepherds can howl to alert their owners about an interesting discovery that they find.

Why Your German Shepherd Howling At Night

The number one reason that your German Shepherd howls at night is to get your attention. However, the reasons they want you to notice them could vary.

If you feel like your dog is trying to tell you something, first off make sure that they don’t need to use the bathroom. If your German shepherd is howling at night then you’ll find some solutions that can help stop it from occurring!

How To Stop A German Shepherd From Howling

There are a variety of ways to keep your German Shepherd from howling. You should choose the way that suits the circumstances, such as if somebody moved in nearby or if their favorite toy has gone missing.